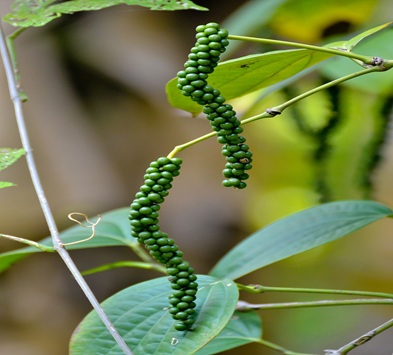 It is one of the important and earliest known spices produced and exported from India.

Pepper can be grown in a wide range of soils such as clay loam, red loam, sandy loam and lateritic soils with a pH of 4.5 to 6.0, though in its natural habitat, it thrives best on virgin soil rich in organic matter.

Pepper can be propagated by seeds and vegetatively  through grafting and cuttings.

When black pepper is grown in slopes, the slopes facing south should be avoided and the lower half of northern and north eastern slopes preferred for planting so that the vines are not subjected to the scorching effect of the southern sun during summer.

As the cuttings grow, the shoots are tied to the standards as often as required. The young vines should be protected from hot sun during summer by providing artificial shade. Regulation of shade by lopping the branches of standards is necessary not only for providing optimum light to the vines but also for enabling the standards to grow straight. Adequate mulch with green leaf or organic matter should be applied towards the end of North East monsoon. The base of the vines should not be disturbed so as to avoid root damage.

It is a method of cultivating the vine in the form of bush.  One year old healthy fruiting branches are selected with 3 to 5 nodes and all the leaves except the flag leaf are removed and planted in a shaded area in the nursery, either in trenches or in polybags (45X30 cm) containing moist coir dust.  Before planting, the cuttings are dipped in 1000 ppm of IBA for 45 seconds.  After planting, the trenches are covered with polythene sheets and in the case of polybags; the mouth is tightly tied with coir thread to avoid moisture loss.  They normally root in 30 to 50 days.  Such rooted cuttings are planted in pots or fields after sufficient hardening treatment. Cuttings grow like a bush and flower in the same year itself.  These bushes produce more and more of fruiting branches only.  Adequate manuring i.e., 2 to 5 kg of FYM along with 10g of NPK 1:1:2 mixtures may be given per bush at 3 months interval.  Watering and plant protection may be adopted according to necessity. Under average management a good bush pepper plant may yield 1.5 kg green pepper in a span of 2 to 3 year.

Pepper vines start yielding usually from the 3rd or 4th year.  The vines flower in May-June.  It takes 6 to 8 months from flowering to ripening stage.  Harvesting is done from the November to February in the plains and January to March in the hills.  When one or two berries on the spikes turn bright or red, the whole spike is plucked.

Berries are separated from the spikes by rubbing them between the hands or trampling them under the feet.  After the separation, the berries are dried in the sun for 7 to 10 days until the outer skin becomes black and shrunken and assumes the characteristic wrinkled appearance of commercial black pepper.

For making good quality black pepper of uniform colour, the separated berries are collected in a perforated bamboo basket or vessel and the basket with the berries is dipped in boiling water for one minute.  The basket is then taken out and drained.  The treated berries are sun dried on a clean bamboo mat or cement floor.

White pepper of commerce is prepared by removing the outer skin and the pulp below it before drying the berries.  Spikes with fully ripe berries are filled in gunny bags and steeped in flowing water for about 7 days.  Outer rind of the berries is then removed. White pepper is preferred by the European consumers.

By rubbing them with hands in a bucket of water and further cleaning the seeds with fresh water.  The cleaned seeds are dried for 3 to 4 days.  The seeds which are now dull white in colour are further cleaned by winnowing and polishing them by rubbing with a cloth.  The recovery of white pepper is about 25 per cent of ripe berries while that of black pepper is about 33 percent.